On my recent cruise, I met someone from St. Louis, Missouri, and the meeting sparked my memory of reading Better Off: Flipping the Switch on Technology by Eric Brende. Brende was a Yale and MIT student who rejected technology and went to live with an Amish-type community for a year before moving to St. Louis. Better Off is the story of that experience. 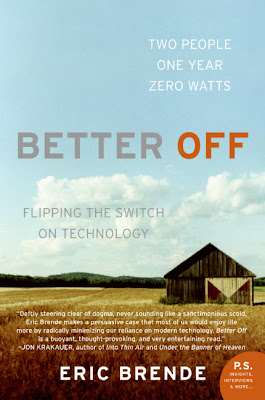 So why am I writing about this book on this blog? I think it has relevance to those interested in paleo/ancestral health.

I'm aware that most of the ancestral health community is not anti-technology. If anything, the Paleo crowd seems to be especially pro-science and pro-technology. For example, John Durant's tagline, "how to live wild in the modern world," is pretty much a repudiation of Brende's back-to-the-farm-life philosophy. Some people might even accuse Brende of advocating "paleo reenactment."

And then there's the fact that the type of agrarianism Brende explores in this book as an alternative to modern life is most definitely not Paleo and is based around grain cultivation.

However, it's also true that many Paleo practitioners count Joel Salatin, a farmer, as one of their heroes. And agrarianism has some rhythms of life (up and to bed with the sun, more walking and manual labor, etc) parallel with hunter-gatherer life.

Aside from these considerations, Brende makes one specific point in Better Off that I thought was interesting and deserved repeating. His concern throughout his Year of Living Amishly is to determine just how little people need to get by. He counts his community's single most important pieces of "technology" to be its horses. Horses are used in his community primarily for turning grindstones grain and for traversing the long distances between homes created by the large-scale farming. Yet, he determines that the horses also use a significant portion of the community's cultivated grain. He suggests that the horse is actually the solution to its own problem, and that farm sizes and farm labor could be significantly reduced by simply getting rid of the horses. This is an interesting observation related to population density, which is ultimately what the rise of agriculture was about.

Regardless of what you think about the relationship of technology to ancestral health issues, you may find Better Off a good read. Brende tells his story well and earnestly. As of 2008, he was still living in St. Louis with his family and living his low-tech, low-cost lifestyle:

Brende's biggest income nowadays comes from Hermann Handmade Soap, which he makes — from his in-laws' family recipe — and his wife sells at Soulard Farmers Market. For several years soap sales doubled annually. Now the Brendes have to decide how far they want to go with the soap business. Sometimes Brende sounds like any other businessman who would like to grow — he plans to add several new products, including natural laundry detergent. But because he's "opposed to encouraging more Internet shopping," he says he has no plans to begin a website, which many would consider a must for any entrepreneur. In the summer Brende operates St. Louis Rickshaw, pedaling tourists to sites in downtown, Soulard, Lafayette Square, McKinley Heights and Benton Park. He likes the work, especially the exercise, although he could do without the occasional abusive drunk. But he admits that the money side of the rickshaw business is almost a wash. "The problem is that my rickshaw is a prototype, so it has a lot of mechanical problems," he says. "I spend a lot of time replacing parts and doing maintenance. I'm a little bit ahead of breaking even, maybe a thousand dollars a year, but it's close." For Brende, career slashing serves a larger goal of simplicity. Pace the March Wall Street Journal piece, Brende doesn't insist on a "distinct career path." Instead of identifying himself by any one of his occupations or even as a career slasher, he calls himself simply a "householder." Growing the soap business past a certain point would "betray my entire reason for living," he says. It also might put an end to one of his other fulfilling jobs — like tutoring home-schooled kids in music (he paid part of his way through Yale playing piano in bars).