Other than the occasional inappropriate patient (male genital exposure + wink), I have experienced only two instances of the sexualization of caregiving since being in the ICU.

In the first instance, a middle-aged woman was engorged and obviously aroused during insertion of a foley catheter for bladder drainage. 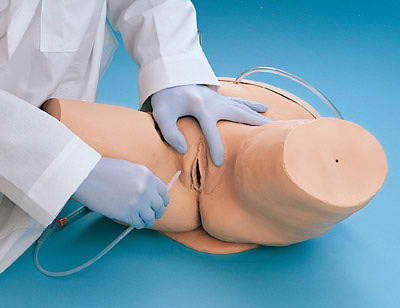 In nursing textbooks, the matter of male arousal and erection during catheter insertion is explicitly discussed and addressed to female nurses. The possibility of female arousal is never mentioned. (Sociologists, make of this what you will.) Unlike an erection, female arousal doesn't really interfere with catheter insertion, but the position and movements of the hips as well as the appearance of the clitoris and labia can still be distracting and disconcerting when performing the procedure.

In the second instance, a younger woman was incontinent, needed to be cleaned, and presented herself in a posture that would be referred to as lordosis in other animals such as the rat. 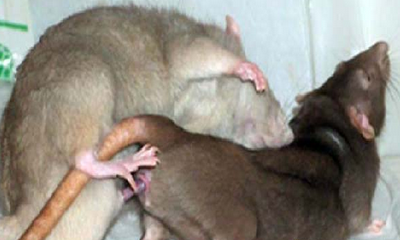 Only partially awake, the patient was following commands in a limited way. I had asked her to turn onto her side to be cleaned but after a few passes with a washclothe still couldn't clean properly, so I asked her to move again. She then arched her back in a way that really did present everything that needed to get cleaned.

Consider the rat... The female performs stereotyped physical actions associated with sexual interest... This culminates in lordosis: assuming a submissive stationary posture with arched back and raised hips. Lordosis is controlled by a specific region of the hypothalamus, a subcortical brain structure. An analogous part of the brain controls submission postures in female primates.

...a woman's preference for physical sexual submission appears to be controlled by the unconscious, inaccessible subcortical part of her brain...

Although Bancroft's Human Sexuality says "There is no equivalent of lordosis in the human female, and in non-human primates, a form of lordosis is only found in the prosimian suborder (e.g. lemurs) ..."

I believe what Bancroft means here is that unlike, say, the rat or the common house cat, female primates do not have a lordosis reflex reaction when they are fertile. Fertility cycles and mating patterns are different. But I think it's pretty clear that, as PT says, this sexual availability posturing behavior is programmed somewhere deep in the primate brain.

In this second case, the patient was sedated from overdose and, as I say, would follow commands without being fully alert. She was somewhat immodest about being covered, and the "history of present illness" touched on related issues. The patient's behavior was not a reflexive response to anything I did. It was also not, technically, following a command, as I did not instruct the patient how to move, only that she needed to.

My interpretation of her behavior is that it was not a response to a specific instruction per se but to instruction as such. Why that would be is another question to be taken up by psychologists and sociologists. I have wondered what was going on in that overdosed brain in terms of awareness. Was this behavior an indication of some previous sexual abuse? Or was it the response of an essentially "sub" personality to being given instructions? Or, because of the patient's low state of mental arousal, was some lower or older center of the brain predominating?