Kittens: "either smothered in onions or in a ragout they are excellent"
-Henry LaBouchere, Diary of the Besieged Resident in Paris

The current issue of National Review has a book review of The Bond from Claire Berlinski, a freelance writer who "lives in Istanbul with a menagerie of adopted stray animals." I haven't read the book, perhaps it's great. The review, however, is a grab-bag of muddled thinking. The core of the article is the contention that we shouldn't eat animals that we care for, or, umm, that we shouldn't eat animals unless we care for them...

the cat in my lap stretched out her paw and tenderly patted my cheek. "She would taste good," I thought, was not a morally serious answer to the question, "Should I eat her?" And if it was not, how could it be a serious answer to this question: Should I eat an animal that has been separated from its mother at birth... pain, fear... slaughter... dismembered...?

Yes, I get the point that she wants us to consider the morality of meat-eating on grounds other than our desire to eat meat. Do you get that she's saying that we can't eat the cow because we treated it like food, but we can't eat the cat because we treated it like a pet? By intimation, this seems to be the argument of The Bond: people shouldn't eat meat because they have a bond with animals. Berlinski presents this as the evo psych update on natural law arguments against buying your steak at Safeway and launches into some invalid Rousseau-ist statements suggesting children are natural vegetarians before they're corrupted by society.

I would submit that, in fact, "she would taste good" is a morally serious answer to the question. At least, it's as morally serious as the answer "I would feel bad to eat Fluffy." The idea that people would feel revulsion at eating pets is intuitive. Likewise, the desire to kill something because it is defenseless and trusting is immoral. However, it doesn't follow from either of these points that having a "bond" with an animal makes it categorically immoral to treat it as food.

Berlinski's essential sentimentality on this point is revealed by the Siege of Paris of 1870, when the residents were forced to resort to eating their pets. Henry LaBouchere: "This siege will destroy many illusions, and amongst them the prejudice which has prevented many animals being used as food. I can most solemnly assert that I never wish to taste a better dinner than a joint of a donkey or a ragout of cat..." LaBouchere confesses to feeling like a cannibal while eating a dog, but somehow the Parisians were still able to distinguish between feeling bad about eating a dog and feeling bad about eating each other.

What sort of bond do people have with animals? People are animals! Animals kill and eat each other! Temple Grandin makes the point that if a dog attacks a baby, it is not some sort of canine opportunism, but a failure on the dog's part to associate baby with man. People's general intelligence--the ability to make associations and distinctions of class--is more pronounced than other members of the animal world. The dog may attack a baby by mistake, but it can attack a squirrel without compunction. Man will not attack a baby by mistake, but it may feel awkward attacking the squirrel that came bounding on the porch innocently searching for nuts and twitching its tail. What gives? Man by his nature can create subtleties and ambiguities of class distinction not available to the dog, and the squirrel moves from prey to non-prey and back.

In most traditional societies, these mental equivocations are solved quickly and easily: people feed each other and do it with other animals, so you can't stay confused between babies and squirrels long at the subsistence level or you'll exit the gene pool quickly. However, in modern society, people like Berlinski or Francis of Assissi, who--on this question of prey distinction--are too many standard deviations away from the norm in the direction opposite Hannibal Lector, can survive.

What has this to do with morality? I'm not what you might call a "deontological egalitarian," but more a virtue ethics type, and I don't see Aristotle, St. Thomas Aquinas, or most of humanity condemning meat eating. If you treat your cat like a baby, it might not be a good sign if you want to eat it, but that doesn't mean it's wrong to eat the cat. Our "bond" with animals is morally neutral except as it reflects our mental state with regard to human society. 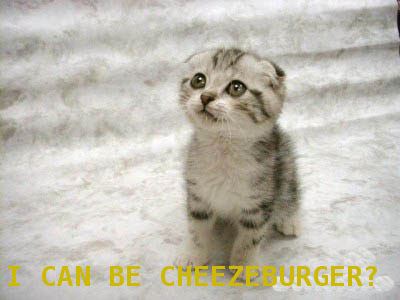 I write the above because I think, despite what she says about factory farming, Berlinski really wants us to stop eating meat altogether. Factory farming poses its own problems, but they are not those of causing death or pain in prey animals per se. Berlinski starts by asking us to justify meat-eating. I think we should start by taking meat-eating as a given.
posted by Chris on Wednesday, September 28, 2011
Newer Post Older Post Home