This evening was composed of a weight routine, spinning class, shower, dinner, and RadioDerb accompanied by a Mata Hari (actually several... tee hee) from Speakeasy. Next I will stumble downstairs, if I can, to watch some TV, which I think will devolve into sleep.

(The excess inebriation tonight is due to McEwen's blog post indicating she is depressed and breaking up with other Paleo celebrity Masterjohn. Oh, the humanity. Was such a worthy woman ever beset with such unhappiness?)

The Derb basically agrees with me on the commemoration of 9-11: we should be 'defiantly normal'. From the transcript of his exceptionally-fine web radio show:

we should act defiantly normal. In 1983, on a Saturday just before Christmas, Irish terrorists set off a car bomb outside Harrods department store in London, killing six people, one of them an American citizen. As soon as the mess had been cleared and the store re-opened, the father of one of the victims went and did his Christmas shopping at the store. Denis Thatcher, the Prime Minister's husband, went with him. That's defiant normality.

By all means grieve in private; remember and honor those who have gone. In the public square, though, stand up straight, keep a stiff upper lip, and stare down the vermin who think they can destroy our civilization. Quite apart from other benefits, doing so will drive them crazy. Crazier, I mean, than they are already.

The Mata Hari is shaping up to be one of my favorite drinks. 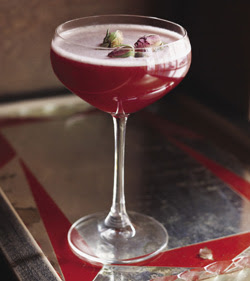 I haven't bought the book yet, but I have made several versions of the recipe (excepting the simple syrup) using a home-made chai-infused sweet Vermouth. It is an excellent drink. Like the classic dirty martini that really highlights olive and salinity, the Mata Hari is a bitter and sour blend that could accompany almost any occasional. When I have some excess, I will buy the book. Pray that the other drinks have the same quality. Thanks.
posted by Chris on Monday, September 12, 2011
Newer Post Older Post Home