Don Matesz of Primal Wisdom recently posted on the 'vegetarianism' of Roman gladiators. Both his post and the archaeological article he critiques are examples of an important principle to keep in mind when discussing antique practices of diet and exercise, a la ancestral health. That principle is

In case you aren't an SAT nerd, you need to know that anachronism is the application or attribution of contemporary modes of thought to ancient people. That is, ancient people and modern people think differently because of cultural differences, and sometimes modern people can accidentally assume that ancient people thought like us when they didn't.

Anachronism can come in simple and complex forms. A simple form of anachronism would be when a child who is ignorant of the old geocentric model of the solar system assumes that ancient people knew the earth traveled around the sun. A more complex and pernicious form of anachronism would be when modern Buddhist monks who know about neuropsychology re-interpret and teach Buddhist scriptures in light of this knowledge.

In the case of both Matesz and the archaeologist, they have made the assumption that Roman people thought of foods in relation to the body similar to the way we do. That is, they assume ancient people thought in terms of macronutrients and their effect on the accumulation of fat or muscle.

But anyone who has read about ancient ideas of physiology and anatomy knows that the Greeks and Romans simply did not think like we do about the body.

In other words, gladiators were fed barley because that was the food the Romans believed gladiators needed to eat to cultivate the physical and psychic constitution called for by their job.

Both the archaeologist's idea that gladiators needed to be fattened up for protection and Matesz's retort that there are modern vegetarian athletes are less wrong than they are irrelevant.


a clue from language

To see my point more clearly, consider the word "gruel". It has, essentially, two meanings: (1) a soft porridge; (2) hard work. While "gruel" is not a Roman word associated with gladiators, the two meanings demonstrate the association in the minds of earlier peoples between diet and activity.

Matesz posts a number of ancient images of gladiators on his website, and points out that they don't look 'fat,' like they should if the archaeologist is correct. Again, anachronism. While there was some realism in ancient art, as a rule artists were not like modern photographers. In fact, in some times and places, artists simply rendered figures according to ideal forms and not according to their appearance at all.

But just as an excuse to post some classical images here, let's take a look at two of the images Matesz did not post. They don't look very trim or muscular to me. I'll nickname them "stockius" and "softius." The results of an intense gladiatorial diet and exercise regimen? 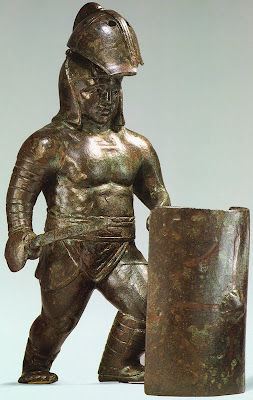 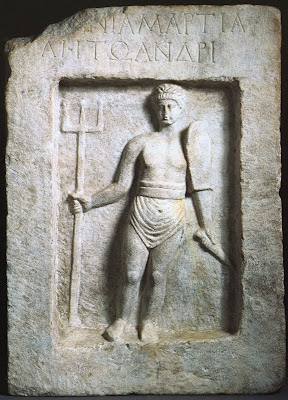 
my experience on a gladiator diet

As it happens, I ate a "gladiator diet" for a whole summer, more by accident than design.

During the summer between my sophomore and junior years, I took a job working in McCabe Library. It didn't pay much, and in order to have a positive balance sheet at the end of summer, I ate instant oatmeal twice a day, every day, all summer. In the evenings, I would eat whatever I could scrounge from friends.

I lost weight, but I also lost muscle. As an athletic twenty-one-year-old with a naturally endomorphic build on a regular weight-lifting schedule, I actually lost strength over the course of the summer. I also suffered injuries from athletic activity for the first time in my life. I got depressed. And friends said I had an unhealthy look about me.

While it's true that I was probably in a caloric deficit in addition to subsisting on gruel, it remains the case that this diet of oats plus occasional vegetables and meats was a loser for performance.

We shouldn't leave this particular topic without drawing attention to David Zabriskie, who was widely touted as the first vegan to ride the Tour de France. Only, in order to do it, he had to eat salmon. Vegan salmon?

* Incidentally, if you read the article about vegetarian wrestler Chris Campbell that Matesz links to, you will see that he essentially comes out of this antiquated paradigm himself. He calls his grey sweat clothes his "monk's robe," etc...