It's been about three weeks now since I've had any wheat, so I'm set to conduct an N=1 experiment in Neolithic Agents of Disease, a reflection on drinking different types of alcoholic drinks.

In recent years, I've essentially stopped eating bread, pasta, rice, and beer. For the most part, this doesn't bother me, although I have the occasional hankering for beer and pizza.

As I documented before, my reaction to beer and pizza has been quite negative since cutting back on grains. I usually get "beer face," and the last time I had a beer, I was literally doubled on the floor with abdominal cramps.

So now it's been about three weeks, and while I've been drinking a little champagne (yeast) and a little whiskey (corn/wheat/rye) here and there, I've completely cut out other grain-based foods and fermented, sparkling drinks. So, I decided tonight was the night to try eating beer and pizza again, and see what happens.

Although alcohol can be found in nature and is occasionally consumed by animals, man has raised it to the level of an art and an industry. I drink a variety of things, although almost always of the non-beer variety: wines, brandy, chambord, gin, tequila, sometimes whiskey.

Tonight, I would like to compare several drinks: wine, a martini (gin-vermouth-olives), a gin-and-tonic, (gin-HFCS tonic), a homemade margharita (tequila-lime), bourbon on the rocks (whiskey), and beer.

Wine: usually red. Usually before or with food. I have to drink quite a lot of wine to notice any effects other than good taste. Then it makes me comfortable, relaxed, and either quiet or talkative. Usually no headache. No GI effects. Quick recovery.

Neutral alchohol/wine: I find I can drink martini's only right before meals. They make me hungry, and they also make me too loopy. While not, apparently, affecting my speech much, martinis make me unsteady on my feet. They also let loose my imagination. I stop worrying about work and such and my mind floats off to any interesting topic, although I can't reason. While I can read after martinis, I cannot read well, and I often find myself saying, "I would love to read such-and-such, but I cannot concentrate well enough to get anything out of it." Martinis don't make me brooding, but they do make me quiet and introverted.

Neutral alchohol/HFCS: Gin and tonics can be consumed only in company and only when one is planning to stay in for a while. I make them with only 1/3 to 1/2 tonic water and fresh lime. They make me happy and talkative but only if drunk while others are around. Conversations always start with how good my gin and tonic is (they're good), and digress from there. An afternoon of heavy G&T drinking ends in a night of conversation suddenly interrupted by intense sleepiness. Like martini's, I rarely drink them except before meals, but unlike martini's, they overpower the meal so that instead of getting hungry, the meal happens by accident.

Neutral alchohol/fruit: Margharitas are the drink that puts me under the table. Not sure why. I make them with 1-part anejo tequila, 1-part Grand Marnier, and 1-part fresh lime juice, without mixer. A couple glasses of these, and I'm sloppy and narcoleptic. Not pretty. Unavoidable, except by stopping early. The transition from nice buzz to drunk happens very quickly and without warning, although the alchohol in a margharita is less than a martini, even without mixer.

Grain-mash alchohol: if I drink bourbon, it is on the rocks and sipped over a long time. If I notice any effect from bourbon, it is simply relaxation. Often, I crave carbs in the morning after a night of work (I think this is a reaction to boredom as eating during the night does not help), and I sometimes have a bourbon instead, which makes me fall asleep when I've been awake all night.

Beer/pizza: I got a pizza tonight and started eating it along with Dogfish Head Sah'tea, and then Westmalle Trappist ale, which I had while sitting out on the deck looking at the rising moon and listening to Bach orgelwerke. While the Sah'tea was actually delicious--a great description by Burkhard Bilger in The New Yorker--it was ruined by pairing with spicey-sausage pizza--I feel that Trappist ale is the more quintessential beer, and in my imagination, Bach would have been drinking something similar.

Within 10 minutes of starting to eat and drink, I was experiencing "beer face" and feeling nauseous. Even while the beer and pizza was tasting good on the tongue, the rest of my body was saying "stop", "nein!" I was sitting on the deck with the above view and thinking, I may need to lean over the edge to puke. While feeling this way, though, I didn't really feel impaired much at all. I kept reading, which I rarely do if I feel drunk, and I kept eating and drinking, which I don't do if I feel drunk. With this beer and pizza, continued consumption felt as though it might make things better. 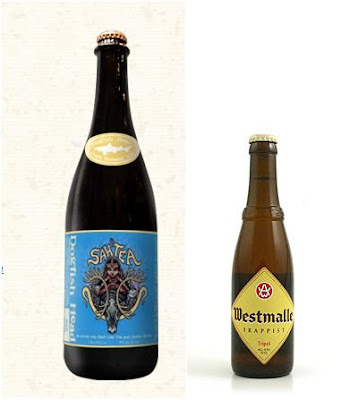 UPDATE p several hours: Interestingly, all nausea and ill feelings have passed. I am still sipping on Westmalle, and simply feel buzzed and comfortable. However, with this buzz my head feels muddled and fuzzier than when I get a buzz from martinis or margharitas. My GI system feels pretty good, with no indications of the intense cramping and gas that quickly followed my last episode of beer-drinking. I'm completely full feeling (full in the belly, not sated of food). The beer still tastes good, the body feels good, and the head is okay if just sitting and enjoying the night air or music but not while trying to think. My bed seems very appealing right now, but note that there is a world of difference--at least subjectively--between drinking until you fall asleep because you can't keep your eyes open and feeling like you want to sleep in order to escape the state you got into by drinking.

UPDATE p more hours: Fell asleep in chair after last Westmalle; now middle of the night. Still feel muddled. Slight stomach upset, vaguely like overeating. Not hungry, but the left-over pizza looks good and beer appeals, too: broke out a Midas Touch and had last piece of pizza. Did not enjoy the pizza, but thinking "a hot, fresh slice would be good."

UPDATE later in AM: late morning the morning after and flatulence has actually increased. Still craving more beer and feeling tired.

As Dr. Kurt Harris has pointed out before, the subjective effects of a food (e.g., excessive gas in the GI system) do not equate to pathological effects (e.g., inflammation). I'm not sure this completely invalidates subjective experiences/exams like this one, however. My guess is that following a food regimen that allows you to eat, drink, and still feel physically and mentally sound will lead to a better and more productive life over-all.

When I think of beer, my two thoughts of usually of the quite good flavors and the several times I have experienced intense cramping. This last night of beer and pizza was less tastey but less bothersome as well.

Based on this experience, the main difference for me between a grain-heavy meal and a meal containing, say, red wine, greens, and meat is that the grain-meal has made me feel more sluggish--both mentally fuzzy and physically full and comfortable being sedentary.

I suppose it could be a volume difference. The amount of suds consumed in a night of beer-drinking is high compared with a glass of wine, and a salad and steak demarcates the scope of a meal clearly compared with having a pile of pizza slices laying around.

It's tempting to think otherwise, however. The fact that drinking gin either as a martini or with sparkling HFCS tonic results in different effects would tend to make one think otherwise. Likewise, there is this strange effect that grains have on me of making me feel like having more if they fail to satisfy or if I overeat.

According to the Neolithic Agents of Disease theory, it should be the grain proteins and not the carbohydrate causing any difficulty. I can buy into that as the results reported here don't occur in the same way after other sources of carbohydrate.