Following the government's "Decade of the Brain" push, all HCPs should have at least a minor working knowledge of this reward system. 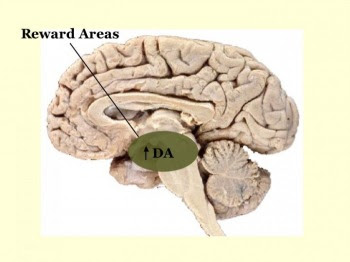 Essentially, says Guyenet, having lots of different tastey foods available means you can always choose foods that will maximize your dopamine reward from eating. Like a junky needing bigger doses of cocaine to get high, Americans with global cuisines and processed foods full of fat and sugar at their disposal at any time need to overeat to get their fix. Thus, obesity.

Although I think there's something there, I am skeptical for a number of reasons, including:
This N=1 experience brings me up to tonight. Feeling tired, I got myself some espresso and started having intense cravings for sugary dessert when I was out. This led me to thinking: why aren't I craving non-sugary high-Glycemic-Index foods that will look the same to my belly as donuts?

Also, I ask myself, current circumstances notwithstanding, why are my donut cravings in general reduced when I cut out bread?

My personal upbringing was one in which a quasi-hippie mother shopped at a local food co-op. I never had sugary breakfast cereals, candy, cookies, etc in the home. According to Stephan's poisonous modern culture theory of overstimulation, I should have been one of the fittest and leanest young chaps around. But I wasn't. In fact, anything with carbs from milk to pasta was fair game for snacking. It wasn't until carbs were cut that things got under control. I like fat, but I don't binge-snack on bacon. No desire.

I don't think carbohydrates are physiologically damaging, but so far I haven't seen anything in either the Paleo or Food Reward paradigms that isn't basically taken care of by Atkins, right down to his induction phase (the at-home Betty Ford Clinic of the Food Reward Diet).
posted by Chris on Sunday, July 31, 2011
Newer Post Older Post Home