I read this book during my recent trip to Denver, finishing most of it on airplanes, in airports, and in the little coffee shop near my brother's house. I picked it up hoping it would give me an overview of "what happened in medicine" in 2009. If a series of such books existed, it would be a great boon to health care professionals. The other "Best American ... Writing" series invite guest editors to choose from a pool of articles written in the previous year and collected by the series editor. Pauline Chen is a surgeon and NYTimes bestselling author. 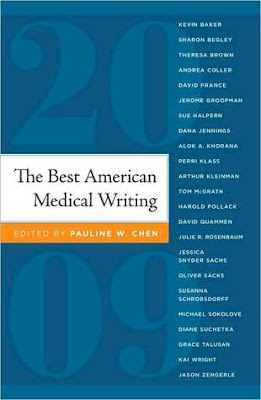 S: The essays in The Best American Medical Writing 2009 lacked the originality and interest associated with the "Best American ... Writing" series. The topic, for example, of contagious cancer in Tasmanian devils is one I've seen on the web and in print several times previously. The article on using virtual reality to treat PTSD doesn't delve into the hows and whys enough to do more at the end than leave the reader with a piece of trivia: "they are using virtual reality to treat PTSD." Although guest editor Chen makes the old analogy between prose and music, she reveals herself to have something of a tin ear, choosing articles that sound like literary attempts by journalists or that simply fail. An article from Glamour magazine written in the first-person is so riddled with "I"s that the pages look like streams of binary code. Judged on its writing, the best article in the book is by Alok Khorana, an Indian immigrant whose contribution reads like a model of English essay composition compared with the other articles, including just the right amount of self-revelation, humor, reflection, etc, written at just the write length, and with actual literary prose. (Having been educated in India, I suspect he received a much better and more traditional training in English composition than the American writers.)

O: Of 23 articles, there are 3 articles about gender, 2 articles about the environment, and 1 each about race, class, sexual orientation, immigration, health insurance, and the war in Iraq. There is also an article touting electronic medical records and central planning in health care, which are progressive issues within the health care community. There are two articles on AIDS (although these duplicate the ones on race and sexuality). Of the remaining articles, 2 deal with mental health, 2 deal with mis-diagnoses, 2 with the patient experience, 2 with care-giving/nursing, 2 with medical research, and the last focuses on the problem of drug addiction among doctors. Other than actual professional journals, the articles have been chosen from the New York Times (3), the New Yorker (2), New York Magazine (2), the New York Review of Books, the American Prospect (2), Harper's, Glamour, the New Republic, Tufts Magazine, Philadelphia Magazine, the Cleveland Plain Dealer, and Newsweek (2).

A: The articles in this book comprise a tour of progressivist topics and concerns, as well as progressivist thinking in medicine. They have been chosen to fit quotas and not on the basis of their merit as writing about the practice of medicine. The articles have been chosen to "educate the public," not only the reading public but also the writing and editing public, about what and how to think about health care in the US rather than being chosen to shed light on medical practice. Although not all without merit, as a collection the essays fail. They don't actually educate the public so much as re-inforce establishment opinion. An Amazon reviewer who said that the articles were challenging to the medical establishment was incorrect as the two that show a dark side to medicine portray irresponsible and self-destructive doctors who are dealt with fairly by the legal system as victims.

P: Although there are some worthy articles, I cannot recommend this book to readers. As of the writing of this review, no subsequent volumes in this series have been produced. What more can I add?
posted by Chris on Tuesday, July 12, 2011
Newer Post Older Post Home