Roy Campbell was a mid-twentieth-century poet whose reputation fell on hard times even before he died. According to the cover blurb of this book, Taurine Provence, it is his first prose work. 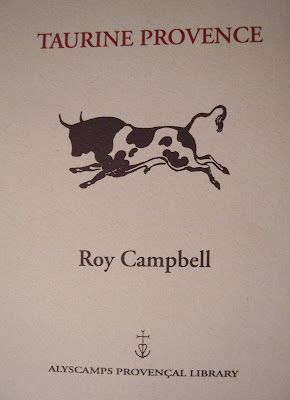 Provence is in southern France, and taurine refers to cattle cutlure. It is a book about bull-fighting and the culture of equestrianism and cattle raising in which Campbell lived during his stay in Provence. 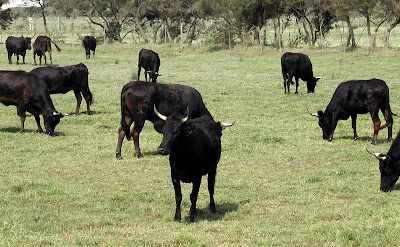 The first copyright date is 1932, which would make it contemporary with Hemingway's Death in the Afternoon. I tried to read Death in the Afternoon several years ago but couldn't finish it. (I have never finished any Hemingway work, although I may try to re-visit Death now and force myself.) Unlike Hemingway, Campbell is more interested in the bullfighting of southern France than of Spain.

You didn't know the French also had bullfighting? Neither did I. According to Campbell, the French bulls are smaller, faster, and therefore more dangerous. My father says the same is true in Mexican bullfighting.

In Taurine Provence, Campbell takes a strong stand against many things modern (this was 1932). He has some strong words against "animal rights" and vegetarianism, but he clearly loves the animals he writes about and the culture of husbandry in the Camargue. He hates mechanization and its effect on people, but concedes that it is probably better for animals:

...it is better for such a fine animal [as the horse] that he should no longer be a drudge but a luxury--and let the machines do the work. Similarly with the bull. Modern science, the slave of puritanism, has a horror of the physical. Mr. Haldane shudders at the indecency of milking cows. He might prefer to prepare the maternal fluid by means of test-tubes, etc (and would probably prefer synthetic sirloins to the real article): whereas I would sooner take a bucket (unsterilized) and go into the field and milk the bloody thing myself and, as for sirloins, they suit me all right.

In addition to sirloin, he is a fan of rustic Provençal cooking: 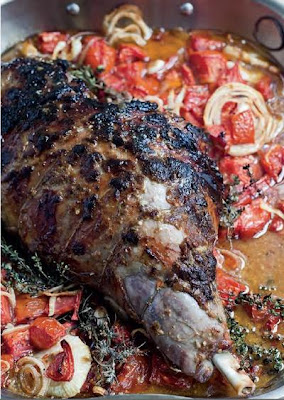 After a course, or a ferrade on the Camargue, there is nothing to my mind so pleasant as to go up to the heights of Fos in the evening light with three or four fair companions and partake of that sacrament of friendship, a good Provencal meal. A bottle of Chateauneuf du Pape from whose black column the setting sun strikes one or two Aldebaran-like, crimson, starry sparks; green olives scented with fennel; silver bread; a poutarque or two cured by ourselves from our own fishing, that equals the roe of the sturgeon; and then the gigot of lamb that all its life never ate anything but rosemary fennel and thyme. We look over the Camarague and the Crau, where we see, peacefully grazing, the fighting cattle of Feraud and Raoux beyond the magnificent avenue of pines which escorts the road to Arles a mile upon its way across the Crau. 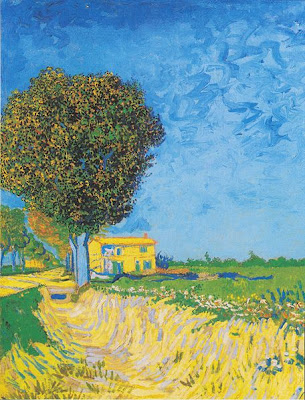 The very short book is a fascimile. It was produced by someone as part of a series of works on traditional culture of the south of France. It isn't clear whether the book was originally in French or English. I think English, although the horrible punctuation in this edition is confusing. Some charming illustrations are not explained--by Campbell or not? 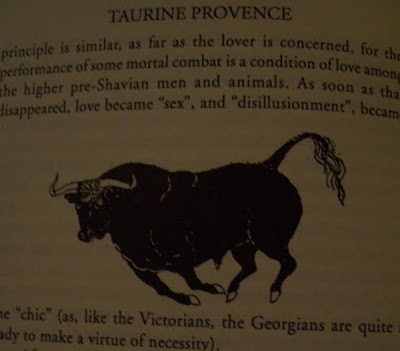 To the modern way of thinking, the bullfight is the worst possible use of an animal by man as the animal dies a slow death that does not serve any purpose sanctioned in modernity. Campbell is opposed to this way of thinking as well. He is aware of his opposition to utilitarianism, although he mostly writes against "big commerce." However, his mind seems to be on a horizon between the modern world we know and a pre-modern way of associating with nature that we don't recognize. Campbell is a little too much in the past to be fully aware of his difference with the world, and the value of Taurine Provence to those interested in old ways of living in nature is more to do with being presented an artifact than following a line of argument.
posted by Chris on Monday, October 03, 2011
Newer Post Older Post Home