Animals Make Us Human is a book about using our knowledge of neuroscience to understand animal behavior and improve animals' experiences of living and working around humans. It is the academic and cognitive science take on Joel Salatin saying that pigs need to indulge their God-given pig-ness. 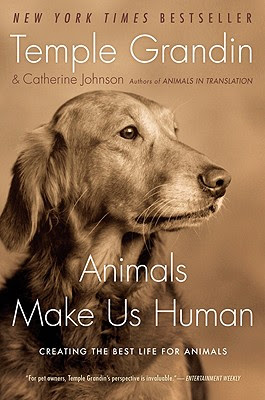 The premise of the book is that animals have the same basic emotional centers in their brains that people have and have the same basic emotional categories. These are specified as PANIC, FEAR, RAGE, SEEKING, and PLAY, a set described by Jaak Panksepp. According to author Temple Grandin, the idea that animals have emotions is still somewhat controversial, at least in the arena of animal husbandry. So the purpose of Animals Make Us Human is another salvo in the assault on behaviorist psychology, but the book is not academically oriented. Rather, the audience is the general public and non-degreed animal workers (zoo employees, etc).

The book is divided into chapters on common domesticated animals such as dogs, cows, and pigs, and explains how to use the 5 emotional categories to analyze behavior and misbehavior, as well as how to improve living conditions. The book also contains a chapter on scientific fieldwork in which Grandin calls for more animal researchers to engage in direct observational studies of animals in their natural habitats.

I purchased Grandin's previous book, Animals in Translation, with a Borders giftcard that I won for having the highest class average in A&P (the $25 card also paid for Better Off). In that book, Grandin focused on what she thinks of as "animal intelligence". From the title, I thought Animals Make Us Human would be her take on living with animals, similar to the book The Bond, that I mentioned in my post eating kittens. However, the title has little connection to the content of the book. If Animals in Translation was Grandin's IQ book, Animals Make Us Human is simply Grandin's feelings book. Grandin hasn't much to say about the ethical or economic implications of her beliefs about animal emotions, although she does say that she continues to eat meat because when she started consulting in animal husbandry conditions for animals were better, and she was able to see that commecial meat production was consistent with animal happiness.

Can we draw ethical conclusions about animal treatment from the contents of this book even though the author doesn't delve into the topic explicitly? Jaak Panksepp's university web page declares "Our overall research orientation is that a detailed understanding of basic emotional systems at the neural level will highlight the basic sources of human values..." Obviously, the animal researchers working in Panksepp's mold are likely to think so. I am less inclined to agree. SEEKING behavior is key for animals' mental well-being. SEEKING behavior in animals is displayed when a tiger stalks and kills prey, but Grandin cannot condone putting a live cow in a game reserve for a tiger to kill. SEEKING behavior in people is displayed when Goldman-Sachs bankers figure out how to make a killing in the markets, but people have been down on this type of behavior at least since usury was banned in early Christian times. Human values are neither simple animality nor the recognition of phenomenological commonality. They are something that arise out of the struggle between these things and the requirements of complex social systems.

Author Temple Grandin is semi-famous for being a PhD university professor with Autism. I first heard her on NPR's All Things Considered, and she has appeared on numerous radio and TV shows. Would Animals Make Us Human be worth the time if it weren't written by a celebrity? I think so. Grandin is not just a circus freak who attracts attention to animal psychology. Her way of looking at the world makes her books extremely salient and visceral. Her explanations are also easy to understand and make sense of a wide range of behaviors across different species. It's possible that she simply leaves out any confounding evidence. I don't have the expertise to evaluate that. But her perspective is systematic and sensible. And, like Salatin, her refusal to disavow meat-eating gives her a moral persuasiveness that vegetarians like Claire Berlinski can't have.


any value for health care workers?

The book is primarily about animal husbandry. Is there any value in it for health care professionals? I think so. There are a lot of lessons here--for example, about the negative relationship between FEAR and SEEKING--that are applicable to management, including the management of medical fascilities and hospital units. But the book is also a good non-technical introduction to Panksepp's emotional categories, which should be a useful tool for understanding patients, co-workers, and ourselves. Patients with dementia and delirium often lack impulse control and the type of emotional damping that rationality can impose on the lower brain. In many ways a delirius patient is somewhat more like an animal, a useful perspective to keep in mind in a stress ER or ICU.
posted by Chris on Friday, October 28, 2011
Newer Post Older Post Home