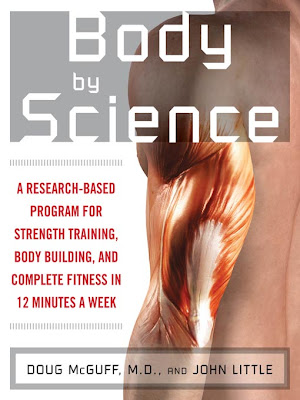 I was prompted to get Body by Science after following author Doug McGuff's comments on the Theory to Practice blog. Body by Science strives to prescribe a work-out routine that takes proper advantage of physiological knowledge to promote fitness, defined as the ability to take part in non-sedentary activities. The book does derive a work-out routine from a presentation of physiology. The recommendations include one short strength-training work-out per week with no traditional cardiovascular work (e.g., jogging) and a "hunter-gatherer"-type diet.

The physiology presented in this book is more extensive than what I've seen in traditional weight-lifting or diet-exercise books aimed at the public. Compared to two text-books for university courses in nutrition and exercise science, the physiology here is about as broad, presented in a slightly more truncated and easy to read format.

The thing that really distuingishes Body by Science, however, is that the physiology is presented in a manner that deconstructs traditional concepts of exercise. To sum up, the book contends (1) that cardiovascular fitness is something that occurs primarily in a diffuse manner throughout the body at the level of the musculature, not primarily as adaptations in the heart and lungs, and (2) that the musculature does not know if it is getting stressed by resistance training or traditional cardio work. The logical conclusion from these two premises is that the best overall fitness training is pure resistance strength training done in a manner that stresses the muscles without stressing joints, ligaments, etc.

I must confess that although I was aware that cardiovascular adaptations occurred at the muscular level, I was also under the impression that there are adaptations in the heart that occur specific to traditional styles of aerobic work such as jogging. However, I am at a loss to say what those are. I have a vague notion that sustained moderately elevated heart rate is important to the heart, but I couldn't tell you what exactly it achieves.

Of course, my failure to refute the physiological and exercise science presented here does not make it correct. That is the biggest draw-back with this or any exercise book--you are always at the mercy of those with more expertise. The only recourse you have as a reader is to educate yourself with some basic knowledge about research and publishing standards and try to evaluate how honest and accurate a book appears to be.

From this perspective, Body by Science holds up well, but not as well as its hype. Subtitled "A Research-Based Program...," you expect a book swamped by citations like an academic paper. The book does have more citations than a typical exercise book, but it is not near what I expected. For example, it says, "Virtually every study undertaken to assess the cardiovascular effects of proper strength training has concluded that they at least equal the effects of more conventional approaches such as running or other steady-state activities." However, the citations given to support this statement are two studies from 1985 and 1988. This is really not acceptable, even if the statement is accurate. Either many more (recent) studies need to be cited (or at least a review paper that examines this issue in depth). This is one example, but I think it fairly characterizes the whole book. 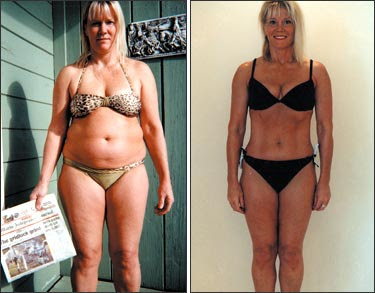 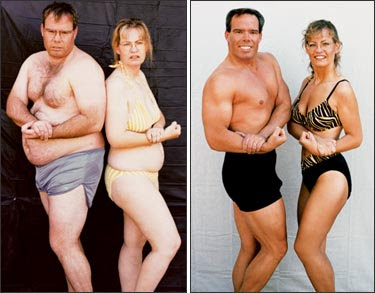 The book's biggest drawback is its failure to present evidence that its specific program has been demonstrated to work. The authors repeatedly mention the years of experience they and other trainers have in using their techniques, but they present no study they've conducted and only one photo of someone they've trained. The use of photos showing muscled young men is dismissed at the beginning of the book by referring to genetic variability in response to weight training. This is true, but in the absence of studies, anecdote shows something. Maybe doing the Bill Phillips Body-for-Life workout won't make you look like those contest winners (see above), but at least we know it can possibly do anything at all. Maybe eveybody's training will stagnate with Body by Science. Who knows?

In addition to its central message, the book touches briefly on a variety of peripheral issues. Some, such as the connection between an attempt to moderate training and a regression in training, confirm my personal experience. Others are silly, like the suggestion to drink cold water all day in order to burn off about 125 Kcal through thermodynamic effects. Any lifestyle cost-benefit analysis of this proposal could not hold up, especially for people living north of Florida.

Despite the criticisms, I think this is a useful book for fitness hobbyists to read. I really want its core recommendations to be correct (and I'm probably going to experimenting with them a little), and even if it is not the best program for otherwise fit and healthy individuals, I can see that it might still have applicability for the elderly, those needing rehab, or those with cardiac or respiratory disorders. It is worth investigation by health professionals as well.

If I were going to improve this book a great deal, I would demonstrate much more thoroughly and specifically that the program lives up to its claim "research-based." If McGuff, an ER doctor, recommended to me that I receive the medication tPA and I found out his recommendation was based on knowledge of two small studies conducted in the 1980s and that he couldn't show me any of his other patients who had success with this medication, I would be flipping mad. If you're going to claim exercise should be approached like a medication, you need to treat it with similar rigour.
posted by Chris on Saturday, July 11, 2009