When I opened up my university's homepage today, I discovered that a student named Nishank Bhalla had been given an award for his genetic research. Nishank is a really nice guy who I met in my virology class last semester. A "full course load" here is 12 credits. Nishank was taking 32 credits, and he was auditing the virology class in addition. He said maybe he wanted to work in the third world for a while after graduation. I think he should go straight to medical school so he can get out well before he's in his 30's, but that's just my opinion. (He could always do Doctors without Borders or something later...) I'm happy for him. Here's your guide to Nishank Bhalla online: 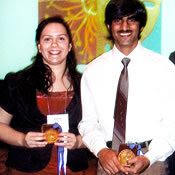 In 2007, Nishank won an award at the Sigma Xi Annual Student Research Conference. He was working on genetic material from the teeth of ancient Mayans. Here's a photo from the 2007 conference. I think he is the mustachio'd fellow in the back row... 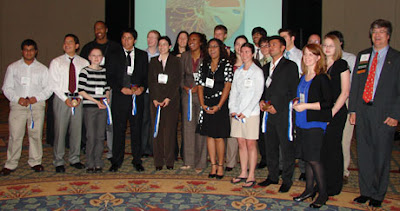 Then in 2008, Nishank again won an award at the Sigma Xi 2008 Annual Student Research Conference. He was again working on sequencing DNA from the Mayans.

I have my own piece to add, as well. Nishank was sitting in on my Bio416 Virology class last semester and running intellectual rings around the rest of us. At the beginning of the semester, he was already ready to be a TA/instructor. Here is my Flickr photo of Nishank explaining Picornavirus replication to us: 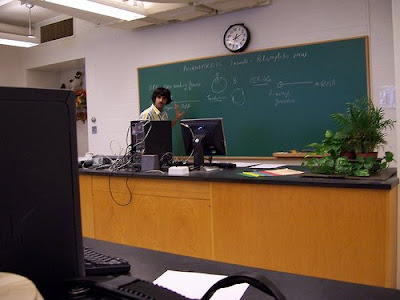