Xigris : how does it work, really?

Xigris, or "recombinant human activated Protein C," is an anticoagulant used to treat septic shock. How does Xigris work?

What does Protein C do?

Protein C is a key component of the body’s natural negative feedback loop for the coagulation cascade. The final steps in coagulation are the conversion of Prothrombin to Thrombin by Factor X and Factor V. Factor X is activated by Factor VIII. 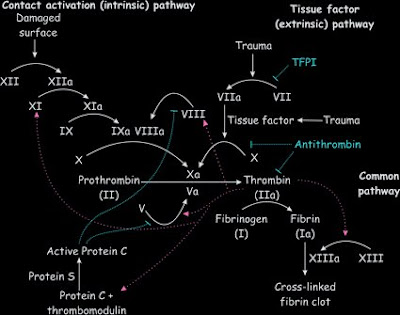 How does this apply to septic shock?

Normally, the coagulation cascade started by Tissue Factor is kept in check by the Protein C negative feedback loop.

However, in sepsis, the inflammation response occurs systemically in the body. Because it is occurring everywhere at the same time, Protein C begins to get used up. When there is no Protein C left, the coagulation cascade's negative feedback loop stops. Without the negative feedback loop, coagulation occurs systemically in the body, since the inflammation is systemic.

Why don't we use warfarin to treat septic shock?

Since warfarin (Coumadin) is a relatively cheap anti-coagulant, it would seem logical to use it instead of activated Protein C. However, because of warfarin's specific pharmacodynamics, it actually decreases the body's Protein C before its anti-coagulant effect starts. In patients with A-Fib or other relatively harmless conditions, a temporary decrease in Protein C has no ill effects. However, it could be dangerous in patients with septic shock.

Why don't we use heparin to treat septic shock?

Since heparin is a relatively cheap anti-coagulant, it would seem logical to use it, too, instead of activated Protein C. However, think back to the coagulation cascade for a moment. Remember that there is an "extrinsic pathway" and an "intrinsic pathway" that lead to coagulation. What do these terms extrinsic and intrinsic mean?

Essentially, the intrinsic pathway is coagulation that is started due to conditions intrinsic to the body. Think of an MI. The blood clotting that leads to an MI is started by the body's response to the conditions of its blood vessels.

On the other hand, the extrinsic pathway is coagulation that is started due to conditions outside, foreign, or extrinsic to the body. Think of a cut. The blood clotting that is produced by a cut occurs when trauma damages blood vessels.

(In fact, research on whether heparin could help in sepsis is unclear. Because many patients are already receiving heparin for DVT prophylaxis, it is hard to create a robust trial of heparin for sepsis treatment. It does appear that it is safe to give Xigris and heparin together.)

Does activated Protein C do anything else?

Besides its role in the coagulation cascade's negative feedback loop, activated Protein C also inhibits some Interleukins, which helps to decrease the systemic inflammation occurring during shock. Both the body's natural aPC and Xigris have this property. And they both also inhibit the body's PAI-1, a chemical that helps to stop blood clots from breaking up. (That's an inhibitor of an inhibitor--i.e., aPC essentially increases the body's natural tPA.)

Does Xigris treat anything else besides septic shock?

Choi et al. (2007) tried to determine whether Xigris would be effective in a single-organ treatment. Citing research showing Xigris was especially effective in the treatment of sepsis occurring from pneumonia, they tried to determine whether Xigris would have a protective effect for the lung in treating ventilator-associated pneumonia. Taking samples from several human patients, they inoculated rats with P. aeruginosa and then treated them with either aPC, tPA, or heparin and had a control group treated with saline.

Interestingly, the results indicated that while Xigris had an anti-coagulant effect, it did not have the anti-inflammatory effect described above, as measured by neutrophil density in the lung tissue. As the authors indicate, this rat model of pneumonia cannot determine effects in people either for pneumonia or for sepsis. However, citing evidence that anti-inflammatories and anti-coagulants failed to improve mortality in sepsis, the authors imply the mechanisms by which Xigris actually works (as I have described above) may not actually explain its efficacy in improving outcomes.

How is Xigris made?