Thought & Action: multitasking, the civil class, and the scholarly voice

2008 is drawing to a close, but not before I could read the autumn'08 issue of Thought & Action, the National Education Association's journal of higher education. This issue contains three articles related to technology (or at least modern life) and education. Although they're not presented as such, all three seem related to me.

In the first article1, Professor Charles J. Abaté reviews with a skeptical eye the issue of "multitasking." He identifies three myths related to multitasking that he refutes with evidence from psychology: (1) multitasking saves time, (2) learning while multitasking is as good as learning while single tasking, and (3) the young have an advantage at multitasking. At least the first two clearly have something to say to nursing and nursing education.

Sources that I don't have time to re-find and cite here have suggested that multitasking is a skill at which women excel (or at least are better at than men) and is a professional characteristic of nursing. As Abaté suggests, this is likely not true. What's more, the suggestion that multitasking is a skill rather than a necessary evil of nursing changes the terms of the issue in a way that is likely not good for patients. The necessity for mutlitasking is something that should be reduced or rooted out systemically at the health institution level, not something that students should be indoctrinated with at the educational level. For example, at my hospital, those on the 7pm-7am shift have to do shift assessments at 7pm and again at 11pm. Charting is something that is necessarily done in snatches of time here and there. Since multitasking nurses are not actually saving time, it's an efficiency reducer and administrators should seek to reduce its incidence.

Multitasking indoctrination occurs in nursing school mostly in relation to clinicals. I have often thought that the idea of learning medications by researching patients is a bad idea, and Abaté seems to agree with me. 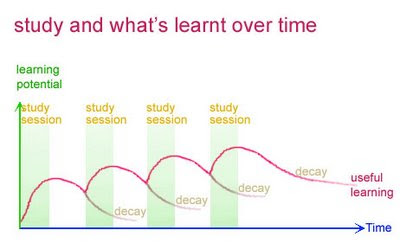 My personal thoughts on patient research and learning medications (and lab values, pathophys, etc) have had more to do with the half-life of information and repeated sustained study, but the multitasking issue adds its own dimension--learning while multitasking does not support analytical thinking. Abaté's evidence here is a study from the 2006 Proceedings of the National Academy of Sciences. It's an interesting study with regard to the clinical learning design of nursing school and something I'll return to in a future post.

The Civil Classroom in the Age of the 'Net

In the second article2, Professor P.M. Forni addresses the problems educators face with kids these days. Just at the end of this last semester, one of the faculty at my school was describing to me how the graduating class below mine complains that all the requirements imposed on them are too stringent and should be reduced. While I have a lot of complaints of my own about nursing school, I have simpathy with things like the required 73 test average for passing and penalties for absence and tardiness. The way students act these days is preposterous, although to try to be fair, I often also feel the anxiety and anger that they seem to feel free to express. Forni makes several suggestions with, in my opinion, mixed usefulness:

Establish a climate of relaxed formality. Control in nursing education is a problem, but formality is not control. Nursing is quite different from other undergraduate programs in the degree of time spent together, whether students all taking the same courses or faculty spending hours at a time with students multiple days per week. The authority gap can disappear, and establishing formalized boundaries can help with this. Also, as an instructor, informality leaves you open to manipulation. If you need to be called by your first name to feel younger, a little bastard can start calling you Mrs. X to tear you down a little. I did that.

Train students to distinguish the trivial from the valuable. Forni suggests that the web-based equality of valuable and trivial material means each course should start from the philosophical perspective of why we are engaged in this study and, having established value, show students how to differentiate good and bad web sources.

Sell your product and yourself. Forni distinguishes the cultures of knowledge retention and knowledge retrieval. This is actually a really big deal, and I confess to being one of the "bad" students in this regard. I depend on lab values and medication information being available at my fingertips. Forni makes the point that knowledge retention is necessary for future learning. In order to make analytical connections, you have to actually remember. I agree.

However, Forni fails to note that this point does not solve the problem of why the student has to sit in a class. Retained knowledge can be tested remotely and gleaned from books and the web without classroom attendance. What is the professor's role? Forni doesn't say exactly.

Let's face it. The modern education system was designed in a time when knowledge was passed from person to person. That time is passed. Either professors bring something extra to the classroom or they are obsolete. Bad professors bring props and humor. Good professors bring illustrative anecdotes and try to identify the areas where these specific students are having trouble.

Stipulate a fair covenant. I think this suggestion is rather poor. I had a nursing professor who did this and then felt she couldn't make a change in the syllabus that both she and the class wanted--duh!

A mixed bag for the road. Here, Forni implies that instructors should seek to diminish the digital divide between themselves and students. I have mixed feelings about this. It's all right as long as two things are kept in mind: (a) making things fancy won't cut it and (b) web-based material still needs to be structured. Filling up PowerPoints with nice backgrounds and ClipArt is not learning how to use PowerPoint effectively. Putting up an extranet site for a course that's full of broken links and files too large to view quickly is taking a step back, not forward.

More on civility from Forni at Johns Hopkins website.

Scholarly Voice and Professional Identity in the Internet Age

Professor Douglas Harrison [LinkedIn] teaches English and also blogs on Southern gospel music. In the third article3, he addresses working in "mixed modes" on his blog (posting things with an academic, critical voice and also trivial and personal things) and suggests that academic blogging should no longer be seen as something to undermine a professional academic career. The points here about niche audiences, forming new intellectual communities, and personal enrichment will be familiar to those who have used the Interwebs since about 2000. The one thing that really strikes me, though, is the reference to an academic who says blogging takes up more of the time he used to spend watching TV and reading mystery novels. Spending all one's time thinking about one's academic field does not strike me as a good thing.