After the posting of the following postcard on PostSecret.com, I feel I can now come out about a type of abuse I received at the hands of Oprah Winfrey and my pediatric clinical instructor. On my first day of pediatric rotation last semester, my clinical instructor forced us to watch an (early) Oprah Winfrey episode about child sexual abuse. The show included interviews with victims of child sexual abuse as well as the relatives (mostly men) who abused them. The main points of this show were two-fold: (1) anyone you know (but especially any man you know) could be a child sexual abuser, and (2) child sexual abuse is propagated from victim to victim to victim. The video was extremely unpleasant to experience, made me wonder if the other students were looking at me as a potential abuser, and made me feel fearful and powerless vis-a-vis the instructor since the video implied that, if I spoke out, it was potentially a sign that I was covering for abuse. In short, being forced to watch the video made me into a victim myself.

Now, of course, you are going to say that it was so very important for me to know about child sexual abuse in a peds rotation. And I agree with you, but this is just the point: the conceptual content of the video could have been communicated adequately in about 5 minutes. Being forced to sit through 40 minutes of emotional turmoil was just value added abuse. People who propagate this video and this type of instruction are, I contend, themselves part of a victim chain in which fear and paranoia is spread as surely as sexual abuse is spread in that victim chain. Attempts to stop child sexual abuse by forcing students to watch videos like this are really attempts to inoculate by giving everyone a little seed of emotional hell to carry around. The implication is that I'm such a bad person that I would ignore abuse if I weren't exposed to it myself.

Well, Oprah, you may have had a tough life, but I reject you and your self-indulgent and useless video. And, clinical instructor, you should know that although I am friendly to your face, every time I see you I feel resentment at having been forced to watch Oprah's trash. 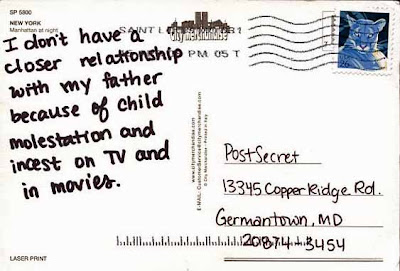 I read a book when I was very young that dealt with father molestation. From that point on, I was so terrified of the idea that my dad could do that. It ended up controlling my relationship with him.

He died 8 years ago and the guilt still haunts me to this day. I wish I could have been closer to him.

I cried for the first time in years when I saw this postcard. I want to thank the person who sent it...it is my secret, too. I have never been strong enough to tell anyone about it.