Miami as a destination

Following my cruise, I spent four days in Miami, on the beach and touring the inland city by bus. Miami is a city for the rich, but not in a good way--a city to be seen in an expensive car but not to go to the opera. The coastal areas could be wonderful if you have the resources to live there, but the rest of the city is a wasteland. There's great weather, but the city has no character, no place where you'd like to sit and just watch life go by. Even as a tourist, there isn't much to do if you aren't interested in shopping or clubbing. 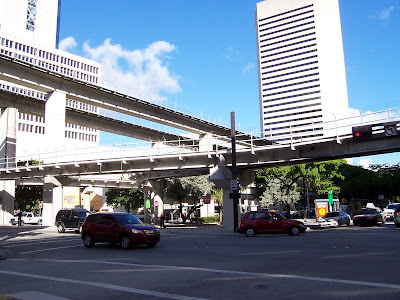 My fantasies of Little Havana were crushed. I was expecting genteel dilapidation but mostly found extensive low-cost housing. I had gone to Chow Hound to find Cuban restaurants, but left my list at home. So I planned to go to a Catholic service Sunday morning and then ask where people were going to eat afterward. This turned out to be a bad plan, and I beat the streets for a while looking for a promising Cuban restaurant until I gave up and headed for 8th Street, which I thought would be a tourist trap. To some extent it is. More than one person in Little Havana told me I could see old men playing dominoes and cigar rolling on 8th Street. Sort like pointing the way to Mickey Mouse in Orlando.

But 8th Street also delivered. I was getting hungry, so I jumped off the bus when I saw a sign for homemade ice cream. This place, Azucar, is run by a statuesque Cuban woman who told me to go eat in a grocery store down the street. On the way, I passed an antiques shop selling pre-Castro memorabilia.

The grocery store counter was full of Cubans of all ages and incomes. My waitress didn't speak English, so an older man helped me order. I ended up with a pile of shredded beef and black rice with fried bananas and water. Not a complex cuisine, but the food was quite good.

After exiting the store, I noticed that I was right across the street from the monument to the Cubans who died in the Bay of Pigs invasion. There's my Little Havana of imagination, to the extent it exists.

Since I stayed in clean, safe, quiet, utilitarian youth hostels in Europe, I decided to try that in Miami as well, a plan that would put me right on South Beach for only $21 a night.

Miami Beach hostel is a great location, but it's also a party every night, with impossibly loud dance music blaring until all hours. The lobby doubles as a night club for European youth on a budget. 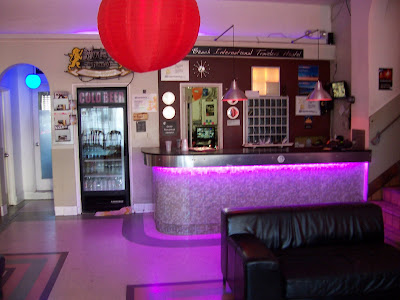 Is there much to do in South Beach? If you don't shop or go clubbing, no. I spent every night going to a restaurant, then a dessert shop, then going to bed early. The ocean isn't a fun place to be at night when DJs are drowning out the waves.
posted by Chris on Thursday, December 08, 2011
Newer Post Older Post Home