Do you like our nation's food labels? Do you find them a trustworthy and convenient way to know about the health content of your food?

What if there were no food labels and you had to go to a Registered Dietitian (RD) to find out about the health value of your food? What if you had to make a $200 appointment with an RD to find out how much carb, fat, and protein was in the food you bought at the grocery store and what implications this could have for your health? Would you feel that this appointment with an RD was really protecting you from harmful choices or protecting the registered dietitians' income?

Right now, our Congress the FDA is trying to decide how the FDA should regulate genetic testing. If we don't tell them what we want, we could end up with the genetic equivalent of having to pay an RD to find out how much protein is in our steak.

You might be thinking, "well, how come we don't have to pay a health care professional to tell us about the health value of our food?" Wouldn't that be a little silly? Diet and health information is broadcast in the news, on posters in stores and hospitals, on advertisements for food, taught in schools... the information is everywhere.

The difference between food and genetics is that everyone basically knows the risks of eating unhealthy food, but almost nobody knows the risks of having genes that predispose you to diseases. The American Medical Association (AMA) is telling Congress the FDA that the only way to deal with Americans' lack of knowledge about genetics is to force them to pay doctors to get information about their own genes. But this isn't the only option...

In the old days, when the public lacked important information, the government would engage in a big "public health education campaign" and encourage doctors, nurses, teachers, journalists, and anyone else they could think of to get the word out. 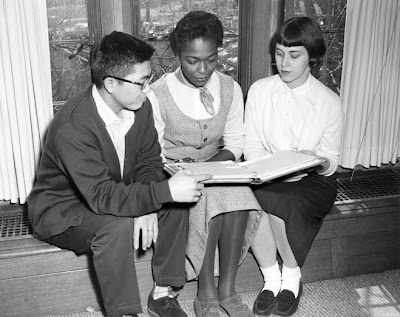 And to make sure companies didn't lie to consumers, the FDA would monitor and regulate the labels on products, not create a class of professionals to act as gatekeepers to the product.

I tend to be a libertarian, but I like our food labels. Food labeling increased the size and power of the federal government, but it also made a more open and transparent society where consumers have better ability to make decisions. I support people who want Direct-to-Consumer genetic testing companies to give accurate and useful information to their customers, but I don't need the FDA to shut them down to feel safe.

At Razib Khan's site, commenter SJ, who says he is a doctor, criticizes this post. Below are his criticisms and my response:

Chris, I think it’s a bad analogy. If your mother had a lump in her breast, would you send the biopsy to an unregulated DTC company to determine if it were benign or malignant? “Genes”, when used to provide medical services, are no different in this respect from “tissues”. We live in a democracy, and if people would prefer to do that, so be it and the laws should change. Personally, I think it’s potentially harmful to the consumer, and the regulation helps more than it hurts.

“If your mother had a lump in her breast, would you send the biopsy to an unregulated DTC company to determine if it were benign or malignant?”

SJ,
Two responses:
(1) This is a false dichotomy. The issue isn’t whether DTC companies should be regulated but how. Should the regulation be like “the consumer can’t use this unless an MD approves” or “the consumer requires assurance that the companies’ claims are truthful”? Nobody is arguing in favor of “back-alley genetic testing”.
(2) Your question has nothing to do with DTC company genomics. You are talking about a medical diagnosis for an acute condition. 23andMe et al. is providing non-diagnostic information about possible future risks.

Interrogating information from a breast mass versus DNA from epithelial cells is not so different. In each case, we are using an individual’s biologic material to inform us about that person’s health. The definitions of”diagnosing” and “acute” are less clear than you think…many genetic disorders can be diagnosed by simple tests, and information gained from these tests has the potential inform about real disease risks, just like any other medical test, biopsies included.

I actually would have no problem with anything these DTC outfits are doing if they offered no interpretation, had no advertising claiming to offer you information on “health and disease”, and did not put relative risks in big, bold numbers next to disease names. But then they wouldn’t really have much of a business model, would they? The companies exist to make money, and they overstate and mislead as much as they can get away with to get more customers. As far as I know, no one makes you pay for nutrition label information. When 23andme starts giving away genotype information for free, we can consider that an apt analogy. And I would like to see the average person try to read their SNP data to parse what it means. Maybe you are well versed in genetics and don’t need a “RD” to intepret, but that’s not true for the vast majority of users of these services.

And yes, eventually someone will do something based on the information form these services that will cause them to get hurt. Not very likely, but it will happen at some point. No amount of token disclaimers should absolve these services from the responsibility to provide accurate information in a medically relevant manner, especially if they are portraying it as such implicitly.

“As far as I know, no one makes you pay for nutrition label information. When 23andme starts giving away genotype information for free, we can consider that an apt analogy.”

I think you are not understanding the point of my post on food labels. I am not equating food labels to 23andMe’s interpretations*. I am equating them to the SNP data. It’s an important distinction. My point is that genetic information seems confusing/medical/magical to some people because nobody is used to it. At some future point in time when people get genetics in school starting at a young age, nobody will think it is more odd to evaluate their own genetic code vis-a-vis health risk than people today think it odd to evaluate food labels vis-a-vis health risk–that is, health risk that they know about because the information has percolated through the culture.

Now, it is true that 23andMe is making you pay for the equivalent of knowing the nutrient content of your steak. HOWEVER, important distinctions are that (1) the technology employed by 23andMe is not readily available to the consumer and (2) the genetic information is specific, while food labels are based on averages. Imagine if (1) the technology needed to know the nutrient content of food was new and expensive or (2) a new technology was created that allowed the consumer to know the nutrient content of the specific steak he was buying rather than an average steak. In this case, there are people who would pay a premium to get this information. Would the FDA be justified in controlling these technologies any more than they control our knowledge of food labels today? No!!!

It is important to remember that one is not paying 23andMe to interpret data but to produce data.

Let me repeat that…

One is not paying 23andMe to interpret data!

23andMe is selling a whole package the base of which is creating the SNP data. The interpretation is only there because the information about health risk has not yet “percolated through the culture.” Yes, it is true that the interpretation is attracting customers, but it is not the basis of the business model. If it were, they would advertise differently, as in “send us your SNPs from other companies and we will use our proprietary statistical methods to tell you what your TRUE risks.” They aren’t doing this (although this is the AMA’s business model!!). At some future point in time, everyone will have their genome sequenced, and the fact that 23andMe is only testing certain SNPs will look like the quaintness of early cholesterol analysis technology, not the quaintness of 18th century doctors interpreting urine.

* If anything, at the current time, 23andMe’s interpretations are more analogous to Cheerios’ claim that it is “heart-healthy.” The FDA has a system for evaluating claims like this rather than disallowing them altogether. That would be more appropriate for DTC genetic testing than shutting down the industry.

“In each case, we are using an individual’s biologic material to inform us about that person’s health.”

You’re telling us that identifying active, ongoing expression at the cellular level is the same as defining statistical risk. So, a woman has a breast lump. You biopsy the breast lump and also send a non-lump sample to find BRCA data. The information from these two tests is close enough in your eyes to call them both diagnoses?

“And yes, eventually someone will do something based on the information from these services that will cause them to get hurt.”

As bloggers pointed out in response to Nancy Wexler’s presentation at the MCGP meeting, there is no data showing a pattern of harm from DTC genetic testing, and this is the only standard from which harm should be inferred. Having to argue this to a doctor is exasperating!!
posted by Chris on Wednesday, March 09, 2011
Newer Post Older Post Home